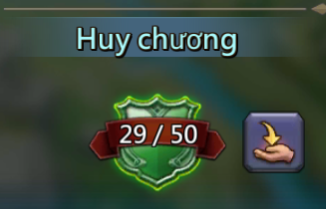 The Wall
The Wall could be an effective part of the Trap too, a lot of Kingdoms, host powerful enemy always hunting for kills and loot, not to mention executing your leader. Remember Spikes, Rolling Fire Logs and the like are ineffective once your Wall goes down, so with so many attacks from your own kingdom hunters, what you could do is the following: Save your wall, do this by using shields from friendly kingdom attackers, if you log in the game daily, shields are cheaper by the short term, such as 24 hours which is what I use, if you do this continually, along with wall repairs; if Kingdom Wars is approaching, you will have a strong wall, grant it, if your wall is 25th level, you will have to shield for 20+ days but don't waste a good trap resource. Try shielding up for a long while, to see if my mad method works, as when you get up in level, say 30-50 Million in might you will exactly make the necessary Gems to pay for it. Build your Spikes, Rolling Fire Logs and the like equally, as they attack specific types of enemies. Set your Innate Talents to Trap attack, build up and make your leader a Wall or Trap attack bonus leader. If your using this on enemy Kingdom during Kingdom Wars, then go in with smaller 4-hour shield, set your main attacking armies to rally on Dark nest, when you go into enemy field, go in with your guild attacking enemy guild, using the anti-scout. When ready you can take your shields down by scouting the enemy in various locations, drawing the enemy counter-attack. Place some grunts or weaker army on enemy resources, if enemy attacks them they may think your entire army is weak, when you attacked the enemy 1st use some weaker units, again to seem weaker. If using troops in the pocket out from shelter, make sure you shelter back your leader, don't forget to have a specific army for this, one you only use to shelter the leader, so it easy to access, I use a few sharpshooters. I place archer type heroes on the wall, and use the Battalion set saver to Infantry or Knight types heroes. When you counter attack once your wall goes down, generally if you don't have time to read the scout reports, your safe to attack enemies who are half you’re might, click on their castle to check, and if a powerful enemy twice you’re might transport’s in, then it's time to consider hitting random relocate, until you’re in a safe spot. Just make sure you looked at your inventory, and scroll down to it, and if you need it in a hurry, the inventory will be right where you looked at it last (Random Relocate).

This was my 1st post ;-)
Good Luck, Happy Hunting